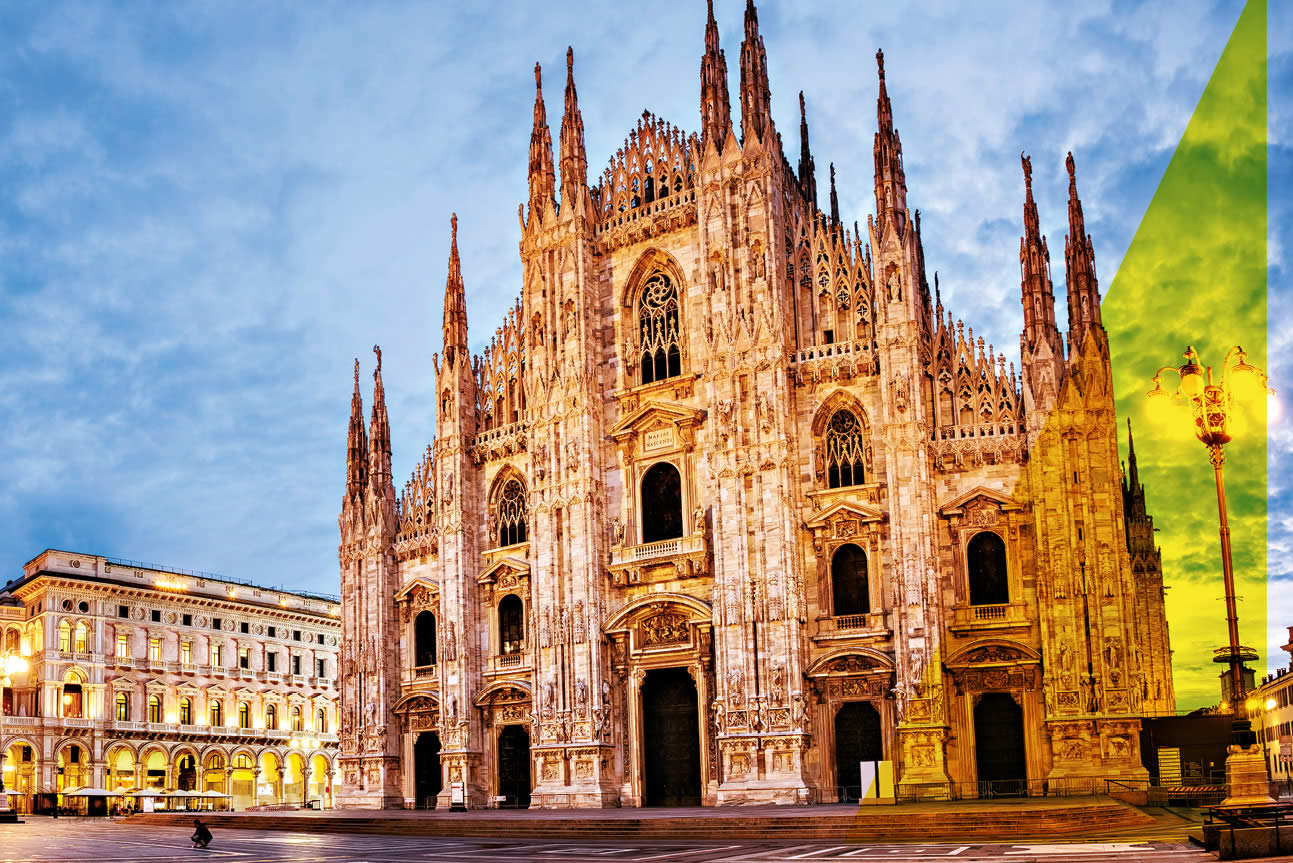 Old city charm, finance, fashion and a South African institute. We spent four days in Milan, as the world welcomed SAIBA to the team of international professional bodies. This article follows our executive team in Milan and takes you on a picturesque tour of Italy’s fashion capital.

A trip to Milan, the Italian fashion capital. The reason for the visit? A CFO conference. There are many reasons to visit Milan, and Italy for that matter, but I never thought that a finance conference would get me there. But here we were, at the IAFEI-World-Congress-meets-World-EXPO-2015, and everything was off to a great start.

Finance has never been this sexy, with high-end fashion, the finance industry dressed in their best, and Milan’s mixture of old streets and new architecture as backdrop, all created the perfect setting for this international congress.

In October 2015, the Southern African Institute for Business Accountants (SAIBA) sent our executive team, Nicolaas van Wyk and Stiaan Klue, together with Marketing Manager Cara-Ann Carstens, to attend the 45th International Association of Financial Executives Institutes (IAFEI) International World Congress for finance executives in Milan. The theme for the congress, hosted by Association Nazionale Direttori Amministrativi e Finanziari (ANDAF), was “Innovation and the Quest for Competitiveness”.

Together we roamed the beautifully paved streets and discussed the possibilities of hosting the 2017 IAFEI World Congress in South Africa. A world of possibilities opened as SAIBA joined the IAFEI network and launched our CFO (SA) designation.

We spent three days at the conference, where we attended talks by industry leaders and connected SAIBA to an international community. The topics covered were on finance, financial services, banking, economics and how to improve companies’ competitiveness through their capacity to innovate.

Days were spent at the congress, while nights and breaks in-between were mostly used to explore the city and befriend other international professional bodies. Here’s a summary.

We arrived at Malpensa Airport around lunchtime. It wasn’t an easy task to navigate the airport in a country where very few people speak English. But with the help of the Italian Phrase Book, we managed to get ourselves onto the right train. Nicolaas, Stiaan and I, on our way to a congress, key to the future of SAIBA and our CFO (SA) designation.

The country already inspired beauty, as we drove through the villages and meadows en route to Milan. We arrived in central Milan, a bus and two trains later. It was Autumn and drizzling with rain. The streets were busy as people went about their affairs. Many walked their dogs, while others rushed to their next destination – all elegantly dressed. We bought three umbrellas and joked by giving Nicolaas a colourful one. I think it must have been a sight for sore eyes – Nicolaas navigating us to go left, Stiaan, convinced we should go right. Me? Eyes towards the sky, trying to capture every bit of beauty, staring at the old buildings and the romantic way of life, while on our way to the apartment. There is just something about the Italians – it’s as if they do everything with passion, from architecture to kissing in the rain.

We eventually found the apartment (which turned out to be towards the right), situated in Brera. Old with high ceilings and romantic finishing. The owner, a beautiful Italian woman, explained the rules and we got settled. Nicolaas immediately wanted to explore, so we walked around the park across the street, then to a restaurant, perfect for after work drinks.

We ordered wine and enjoyed various snacks on the house. Italians eat a lot! We then moved on and found a hearty Italian restaurant, where we had pizza for dinner. Families filled the tables beside us, as we enjoyed the ambiance of a different world.

It was much colder than anticipated, and wearing high heels was not the best idea. Cold, wet and late, we ran through the park in an attempt to make it to the congress in time.

After a few missed turns, and accidently running into Sforza castle, it turned out to be a beautiful way to get lost. Google Maps took us past a few Italian boutiques and café’s, to the Palazzio Mezzanotte, where the congress was held. Large banners and a queue of beautiful Italians welcomed us. The day begun.

ANDAF Chairman Fausto Cosi opened the congress with a strong statement: “He who fails to innovate, is lost.”

Many things about that day stood out, but these words really stayed with me: “When the level of competitiveness is high, what makes the difference is the ability of entrepreneurs to innovate. However, innovation must be a concept which goes beyond the production of goods and services, it must embrace a broader viewpoint: it is necessary to innovate processes, business models, the very way of being a CFO.”

After the congress, we walked back to our apartment and had coffee at a café right by the Duomo. It was so beautiful, this larger than life building, pigeons in the square and hundreds of tourists staring up at the glory of the towers. A scene straight out of a fairy tale.

We had just enough time to get ready for the evening’s gala dinner. For me, this was a highlight of the trip! The men dressed in black tie, and me in a black dress and high heels, ready for an event like no other.

We walked about 3km to the Palazzo Parigi, where the event was hosted. By the time we arrived, the splendour of the venue and the event overshadowed the long walk in the rain.

We arrived in a beautiful ballroom filled with elegance and festive people, enjoyed a five star dinner with music and networking, and truly felt like diplomats when they welcomed South Africa and announced SAIBA as the newest member of IAFEI. The evening was truly spectacular!

Our last day at the conference, before the end of our Milan tour. We woke up earlier to use the time to wander the streets of the city. I am so happy we explored the city as we did, on foot, and without any tour guides. It was a great way to stumble upon hidden restaurants and cafés and find the larger attractions, as if we were the first ones to discover it.

Some key phrases from congress that day:

“In order to compete, we need economies of scale and differentiation.” – James Hogan, Chairman and CEO of Etihad Airlines

Innovation is not an opportunity, now, innovation is the new baseline – if you don’t innovate, you don’t survive.” – Carlo Alberto Carnevale Maffè of Bocconi University in Milan

What an insightful day it was!

After some fresh insights and inspiration, I strolled to the Galleria Vittorio Emanuele II, where luxury shops and elegant cafés meet. It was like heaven, and would be for anyone who loves fashion and beauty.

Thereafter I visited the museum, Castello Sforzesco, where I was mesmerised by Michelangelo’s last sculpture, la Rondanini Pietà, the piece he was working on just days before his death,. Walking into the castle was like entering another era.

We ended the day by having dinner at a small restaurant (I can’t remember the name) in a piazza. The food was traditional, warm and delicious.

We ended our trip with a tour of the World Expo and then it was time to head home. What an adventure and opportunity.

At the end of the week, as we made our separate ways, I knew we left with so much wonder, inspired by a city that resembles so much promise. And SAIBA left with a promise too – we shall be the hosts for the 2018 World Congress in South Africa.