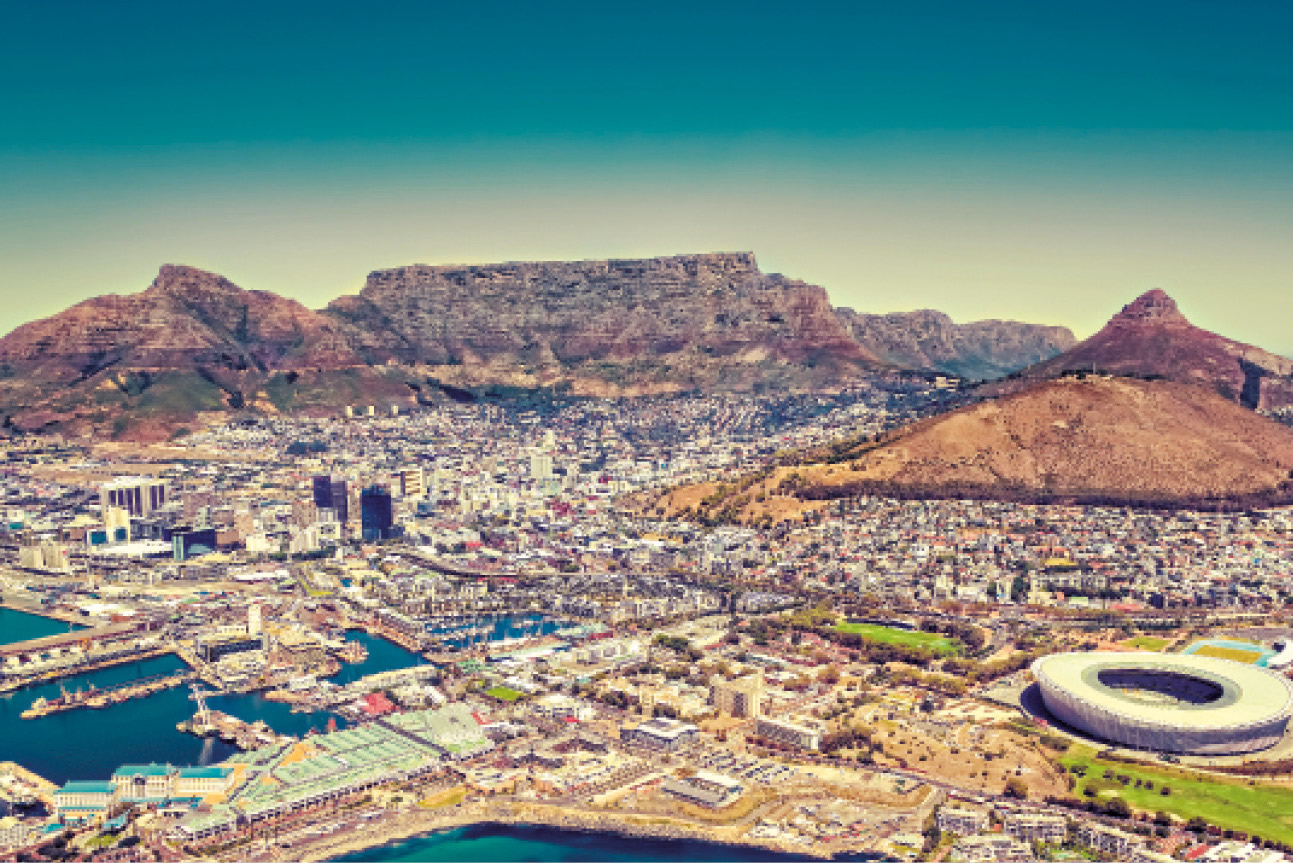 A look into financial regulation and promise of a growing investment destination.

Regardless of tough economic circumstances, South Africa is still worth the investment. Helene Cilliers looks at the CFO in South Africa and the future of finance.

One such optimist is Aarti Takoordeen, CFO of the Johannesburg Stock Exchange (JSE).

In the first of a series of CFOTalks, a national platform operated by the Southern African Institute for Business Accountants (SAIBA) that’s devoted to sharing ideas and conversations between CFOs, she said that large institutional foreign investors, who know the global emerging market funds well, are very impressed with the high quality of management in corporate South Africa.

Takoordeen went on to say that South Africa is viewed as having the best corporate quality management of the emerging markets and that the country is definitely the economic hub of Africa.

“We must not underestimate the high quality and depth of experience in leadership in corporate South Africa.” South Africa is rated as one of the best corporate governance environments in the world according to the World Economic Forum’s (WEF) Global Competitiveness Index.

The JSE itself is ranked in the top three in most indicators of corporate governance. For the past six years it has been rated as the best regulated market of all exchanges in the world. For five of these years it was rated number one on the strength of its auditing and reporting standards.It was also rated number one in terms of raising capital on the cash equities market in the world.

“We are really proud of those accolades. It shows in our King III advancements, it shows in our reporting capabilities, and it comes through to foreign investor sentiment in terms of foreign respect for leadership in South Africa,” said Takoordeen.

The country’s strict financial regulatory environment plays a huge role in this international vote of confidence in corporate South Africa.

SAIBA, as a member of the International Association of Financial Executives Institutes (IAFEI), the custodian of the CFO profession, supports its members by adopting and implementing international standards relating to ethics, quality, education, financial reporting, assurance and other engagements. SAIBA enables the sharing of knowledge and assists members in understanding all areas affecting accountants, CFOs and other financial professionals.

SAIBA has also engaged with the University of South Africa School for Business Leadership (UNISA SBL) to become the official Leadership School for the CFO (SA) designation. Through this partnership, potential CFOs can obtain their MBA or MBL through UNISA SBL, who will offer a custom degree to meet the skills requirements for the education part of the CFO (SA) designation.

As the custodian of the auditing profession, the Independent Regulatory Board for Auditors (IRBA), together with the profession, must maintain the quality and integrity of the audit system, thereby contributing to the protection of the financial interests of the public.

The WEF ranking brings confidence to foreign investors that they can trust and rely on our auditing strength despite the economic meltdown and other challenges that the country and the auditing profession have been experiencing, according to Bernard Agulhas, CEO of the IRBA.

South Africa’s decision to adopt the globally recognised International Standards on Auditing (ISA) as well as the International Financial Reporting Standards (IFRS) as early as 2005 has had a direct effect on the country’s leading ranking.

Agulhas emphasises that South Africa, which has moved up the overall rankings to number 49 from 53, also has a vital role to play in supporting other countries on the continent to improve their financial standards and reporting processes so that Africa can become internationally respected in global markets.

In addition, developing countries need to create stronger ties among themselves, with greater collaboration between the private and public sectors as well as between industry and government.

South Africa, the gateway to Africa

“South Africa can also play a role in unlocking growth in the rest of Africa,” said Takoordeen.

These opportunities exist through South Africa’s support of regional integration and infrastructure development on the continent, as well as its support for Africa’s Agenda 2063, a global strategy to optimise use of Africa’s resources for the benefits of all Africans.

According to South Africa’s Minister of Trade and Industry, Dr Rob Davies, Africa has defined a developmental trajectory for itself that involves moving away from its current insertion in the global trading system as a producer and exporter of primary commodities and an importer of finished goods. “In this regard Africa has defined a very clear agenda to move up the value chain and industrialise through an ambitious developmental integration programme that combines market integration alongside infrastructure development and cooperation to develop regional industrial value chains”, he recently said in Nairobi.

Some of the aspirations of Agenda 2063 – a global strategy to optimise use of Africa’s resources for the benefits of all Africans – is for Africa to transform, grow and industrialise its economies through:

Companies that invest in South Africa will have a sophisticated platform and support from where they can enter into other African markets.

The South African government, by way of the Department of Trade and Industry (dti), already provides strong protection to investors in terms of the framework provided by the Constitution and other relevant legislation. It is also important to recall that, as a member of the World Trade Organisation (WTO), South Africa subscribes to a range of disciplines and rules that provide multilateral guarantees to foreign investors, according to Minister Davies.

During a debate on the new Protection of Investment Bill 2015, Davies said the underlying philosophy of the Bill is to clarify the standard of protection that an investor may expect in the Republic, and to promote all types of investments by creating a predictable business environment that is readily understandable to an investor. The Bill guarantees the rights of investors in accordance with the Constitution. In addition to this, the Bill contains international investment law concepts such as national treatment, physical security of investment, legal protection of investment and transfer of funds in line with constitutional principles and applicable norms. This is aimed at re-assuring investors that South Africa is, and will remain, open to Foreign Direct Investment (FDI) and will continue to provide strong protection to investors.

“In developing the Bill, we have taken into account all the concerns raised. Our aim is to modernise South Africa’s policy approach to foreign investment in view of national, regional and global developments,” said Davies.
He went on to say that the current pipeline of potential investment projects that the department is monitoring and facilitating includes ZAR 25.3 bn from foreign and ZAR18.5 bn from domestic sources. Aggregating funding from both sources, it is expected that upcoming investments will likely be distributed as follows: ZAR 28.8 bn for the green economy; ZAR 7.96 bn for advanced manufacturing and ZAR 5.74 bn for mainstream manufacturing.
He said the department has identified five key pillars of industrial development, namely:

“The opportunities are significant, and must be energetically leveraged by unblocking obstacles to expanded regional economic trade and crafting clearly-defined programmes of complementary regional industrial development and value chain integration,” said Davies.

After the Industrial Development Corporation recently hosted a conference themed: “Driving South Africa’s Competitiveness through Industrial Development”, Ms Chichi Maponya, Brand South Africa Chairman, wrote on Sanews.gov.za that there are significant opportunities for South African manufacturers, particularly within the African region which has seen growth rates exceeding those in the developed world – at an average of between 4 and 5% between 2002 and 2014.

“African countries provide investors with abundant prospects to access the growing consumer demand. In April 2015, Manufacturing Circle’s executive director at the time, Coenraad Bezuidenhout, pointed out that the relative ease of access to sub-Saharan Africa and beyond, and with an understanding of the region, South African manufacturers can get ahead of other investors looking to Africa for new opportunities.

“With an estimated 800 million people urbanising on the continent in the past decade, there are huge opportunities in terms of fast-moving and durable consumer goods for manufacturers. The current economic conditions in Africa make it the prime investment destination and present a favourable time for South African manufacturers to introduce their products to the African market, particularly fast-moving consumer goods.”

Maponya says South Africa has the most diversified economy on the continent and plays an integral role in Africa’s advancement. It is also in a great location for growing businesses in other parts of the African continent.

According to the dti, some of the sectors in South Africa that have high growth and investment potential, include:

Nimrod Zalk, Industrial Development Policy and Strategy Advisor at the dti wrote that manufacturing plays an irreplaceable role in driving growth and economic development. South African manufacturing continues to be heavily dominated by resource-processing sectors that are capital and energy intensive. A structural shift towards higher growth in more value-adding and higher labour absorbing manufacturing sectors is essential for South Africa to shift to a development path that generates more growth and higher levels of employment.

It is in all these areas that the need for a robust and quality designation for CFOs is so important. Michael Sass, the former accountant general of South Africa and current SAIBA board member believes a crucial aspect that will drive the success of all the infrastructure development plans is the qualification and competence of public sector CFOs. That is why South Africa adopted a new skills framework for CFOs working for state departments or companies. They are also required by law to become a member of professional bodies such as SAIBA and acquire the designation CFO (SA).

SAIBA provides a career pathway to develop candidates into a professional CFO. Their designations therefore support development at the three progressive levels of finance namely accountant, financial manager and CFO.